Over the first week July, I usually have a few days off, so I figured I would fire up the smoker and make some 4th of July smoked chicken.

We were expecting family (around 8-9 adults), so my wife and I planned on trying smoked chicken. I have smoked an entire chicken before, so I knew if I were to do that again, it would take a bit longer than smoking it for two people. We decided on 7 chicken breasts, which filled two racks of my vertical water smoker and I decided to season them lightly with spices. Breaking the chicken up into just breasts, would keep the time down to under 3-4 hours, if I can keep the temperature fairly accurate.

At the time, I was using Kingsford Briquettes (original). I had recently bought a few bags, so I wanted to use them up. It took about half a bag (10lbs) for this cook-out along with 2 decent-sized hickory wood chips that were water soaked, 1-2 inches thick, wrapped in aluminum-foil (lasts about 2-3 hours). I filled the water bowl about half-way. 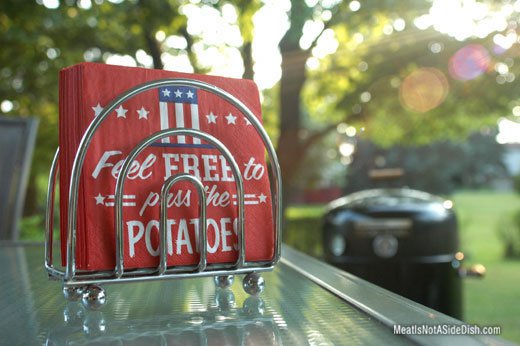 My goal of keeping the temperature of around 225 degrees, was a success – I must say, this was the hardest part – and usually is. Every time I cook, I learn new things. I found that by turning the charcoal over (only opening the side access door), it would keep the temperature up and more consistent. You should always keep the lid on as much as possible to keep the heat going, so opening the small door on the side didn’t harm it too much. While wearing oven-mits, I reached up underneath and periodically turned the charcoal bin 180 degrees.

The chicken reached 165 degrees right at three hours (in maybe a little less time too). Along side the chicken, we served fresh grilled veggies. In the end, I can always tell when someone enjoys my cooking … when they go back for seconds!